With the continuous progress of research on solar high-efficiency batteries in the industry, the current rated operating current of most single polycrystalline battery modules is relatively high, with an average value of 8A-9A or above, and the current will generate power when flowing through the welding ribbon inside the module Loss, this part of the loss is mainly converted into Joule heat (Ploss = I2R) existing inside the component.

Therefore, as the current increases, this part of the loss will be greater.

Conventional components usually adopt series structure. Because the current of the half-chip battery is halved, the voltage remains unchanged.

Therefore, if the series structure is used for design, the component voltage will be double that of the conventional component, which will increase the cost of the system.

At the same time, there is a certain safety risk after the component voltage is doubled, so in order to ensure that the overall output voltage and current of the conventional component are consistent In general, half-cell battery components are designed in series-parallel configuration, which is equivalent to two small components connected in parallel.

The half-cell module is the same as the conventional module, which is encapsulated with tempered glass, EVA and TPE (TPT, EPE) and other backplanes.

The junction box will be different, generally using a three-piece junction box. In terms of process, the process change of the half-chip module is simple.

Since the number of cells is doubled, the time for series welding of the cells will also be doubled.

The difficulty is that the lead wire of the bus belt is led out from the middle of the back of the module.

At the risk of battery cracks or hidden cracks, the current automation problem of the busbar welding in the middle of the half-chip assembly has been overcome, to a certain extent, it has also promoted the rapid development of the half-chip battery assembly. 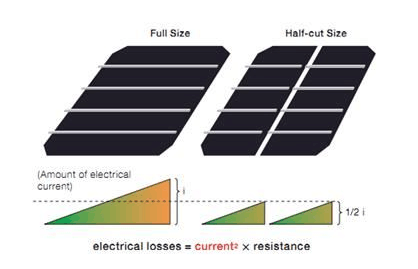 In terms of shadow shield, due to the unique design, it exhibits superior anti-occlusion performance than conventional components.

It is also important to choose whether to use the whole cell or the half cell. For more details, you can come to our customer service to learn more. 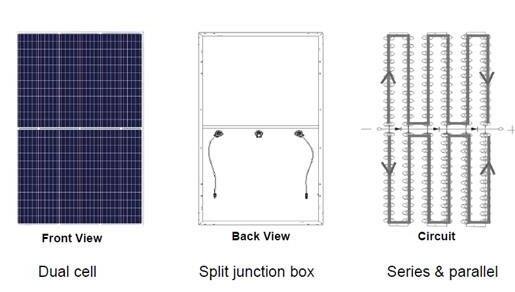 A great news is that EAST LUX Ultra-high efficient solar panels are in regular production now.  These panels adopt our unique technology. Could reach 440W with size 2*1m. The module efficiency could reach 20.85%. This is at high end overall the market.  The most exciting thing is that these panels are in promotion stage. So the price is the most competitive.message me now if you are interested!!!